The Mirpuri Foundation was the sixth confirmed team competing in the 2017/2018 edition of the Volvo Ocean Race. Throughout the competition, the team conveyed a strong environmental message dubbed “Turn the Tide on Plastic”. The campaign was spread during the eight months of the race, which covered 45,000 nautical miles around the world and 12 Host Cities on six continents.

The Mirpuri Foundation founded one of the seven teams competing in the 2017-18 edition of the Volvo Ocean Race. It named the team “Turn the Tide on Plastic” and associated it with a strong message for ocean sustainability. In addition, the team helped to raise awareness for the United Nations “Clean Seas” campaign.

The “Turn the Tide on Plastic” team took the Clean Seas message around the world, with the aim of awakening awareness for the enormous pollution of the seas by disposable plastics. The message was simple and clear and it embellished the hull and sails of the Mirpuri Foundation vessel. Sailing around the world already was one of the most challenging competitions on the globe but the added commitment to sail on the most sustainable regatta ever, to radically reduce the use of plastics, and, in doing so, change mindsets all across the globe proved to be incredibly gratifying for the team and all the foundation. This conquest revealed a vision that encompassed the entire problem with plastics, from the small plastic bottle an event spectator is holding, to the minuscule microplastics that threaten wildlife in oceans.

Throughout its course the Foundation has sought to combat the use of plastics on all 12 scales of the regatta, to conceive of educational programs and foster initiatives and innovative scientific research in some of the most remote waters on the planet. Working closely with the United Nations, the Foundation’s objective sought to extend its Clean Seas campaign with the aim of inverting the toxic tide of marine pollution by plastics.

The team founded by the Mirpuri Foundation was the only one to compete without a commercial message. Instead it emphasized a purely environmental discourse, making populations aware of the harmful consequences resulting from the use of disposable plastics by taking part in conferences, workshops and beach cleanups in the cities it passed through.

The Mirpuri Foundation’s efforts have been rewarded. The regatta’s plastics footprint, estimated at 21,3 tons of plastic, with 17,7 tons being recuperated. The implementation of water recharging points resulted in using less 388.000 single-use plastic bottles, and in collecting signatures from close to 22.000 people for a United Nations commitment denominated Clean Seas.

Britain’s Dee Caffari was selected to lead ‘Turn the Tide on Plastic’ with a mixed, youthful team bringing a strong message of sustainability. In addition to raising awareness around the growing issue of ocean pollution, the participation in the Volvo Ocean Race was part of the Mirpuri Foundation’s long-term ambition to build a new chapter in Portugal’s rich maritime history by creating a strong offshore legacy for future generations of Portuguese sailors.

“Turn the Tide on Plastic” also proved to be innovative in regard to the history of the race by promoting fundamental values like gender equality and by including younger sailors on its team. The boat was the only one with a female skipper, was crewed equally with men and women, and carried the team with the highest number of crew members under the age of 30.

The Volvo Ocean Race took off from Alicante on October 22nd and stopped in Lisbon, Cape Town, Melbourne, Hong Kong, Guangzhou, Auckland, Itajaí, Newport, Cardiff and Gothenburg before the grand finish in The Hague at the end of June 2018. 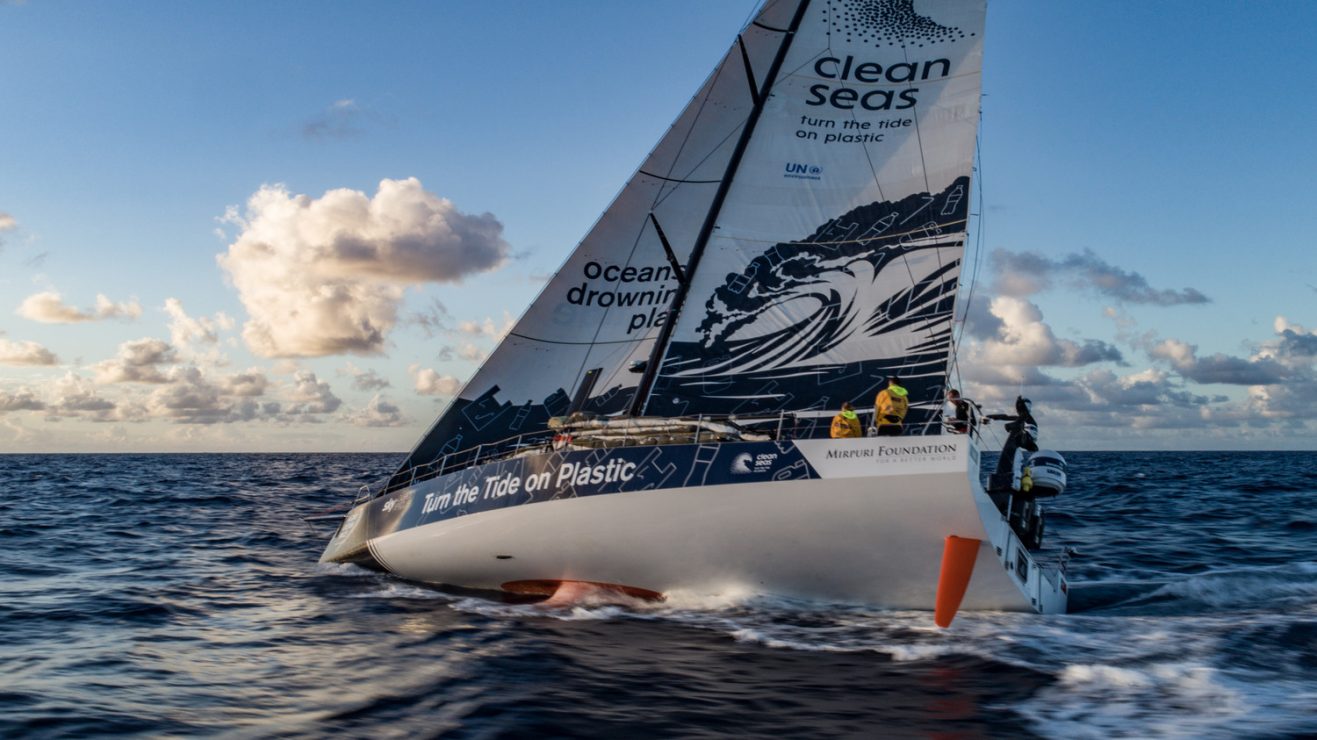 Turn the Tide on Plastic Aircraft

The Mirpuri Foundation amplified the message of its Volvo Ocean Race “Turn the Tide on Plastic” boat, by painting an Hi Fly Airbus A330 in the same livery.

Hi Fly, an airline operating worldwide as wet leasing specialist, supported Mirpuri Foundation’s idea to carry the message across the five continents. The chosen aircraft was an Airbus A330-200, which is now painted on both sides, matching the “Turn the Tide on Plastic” boat – one dark blue “polluted” side and another light blue “clean” one.

May 2019 – Turn the Tide on Plastic’ still carrying sustainability message

September 2018 – “Turn the Tide on Plastic” Aircraft Circumnavigates the Globe

January 2018 – Turn The Tide on Plastic around the World