In 2019, the Mirpuri Foundation announced the name of a new campaign. “Racing for the Planet” is simultaneously the motto of an environmental campaign and the name of the boat that is competing in the inaugural The Ocean Race Europe.

The Mirpuri Foundation took part in the 2017-18 edition of the The Ocean Race (ex-Volvo Ocean Race), one of the most important regattas in the world, with its “Turn the Tide on Plastic” campaign, seizing the opportunity to promote the global movement against ocean pollution by plastics.

The environmental concerns continue to be on the frontline in the inaugural edition of The Ocean Race Europe, in which the Foundation is competing with a team focused on raising awareness of the problem of climate change.

In recent years we have all watched as extreme weather conditions and rising sea levels have caused great hardship for millions of people around the world. We are told that if we do not take action on climate change, that our planet’s surface temperature could rise by three degrees, bringing as yet unquantifiable destruction and suffering to the people and animals that call Planet Earth their home.

United Nations states that Climate Change is the defining issue of our time and we are at a defining moment. From shifting weather patterns that threaten food production, to rising sea levels that increase the risk of catastrophic flooding, the impacts of climate change are global in scope and unprecedented in scale. Without drastic action today, adapting to these impacts in the future will be more difficult and costly.

The Mirpuri Foundation is aware that fighting climate change is not the sole responsibility of governments and industry; all citizens must stand together and make responsible decisions to stop climate change. Thus, the “Racing for the Planet” campaign aims to lead people to feel the need to act and, consequently, change their behaviours.

The Foundation believes that if it is able to inspire other people, then these people in turn will inspire others. If millions of people are conscious of the direction in which we should be going, and that we really need to change the course of the problems that affect our planet, then the Mirpuri Foundation can have a huge impact by being the initiator of positive behavior. 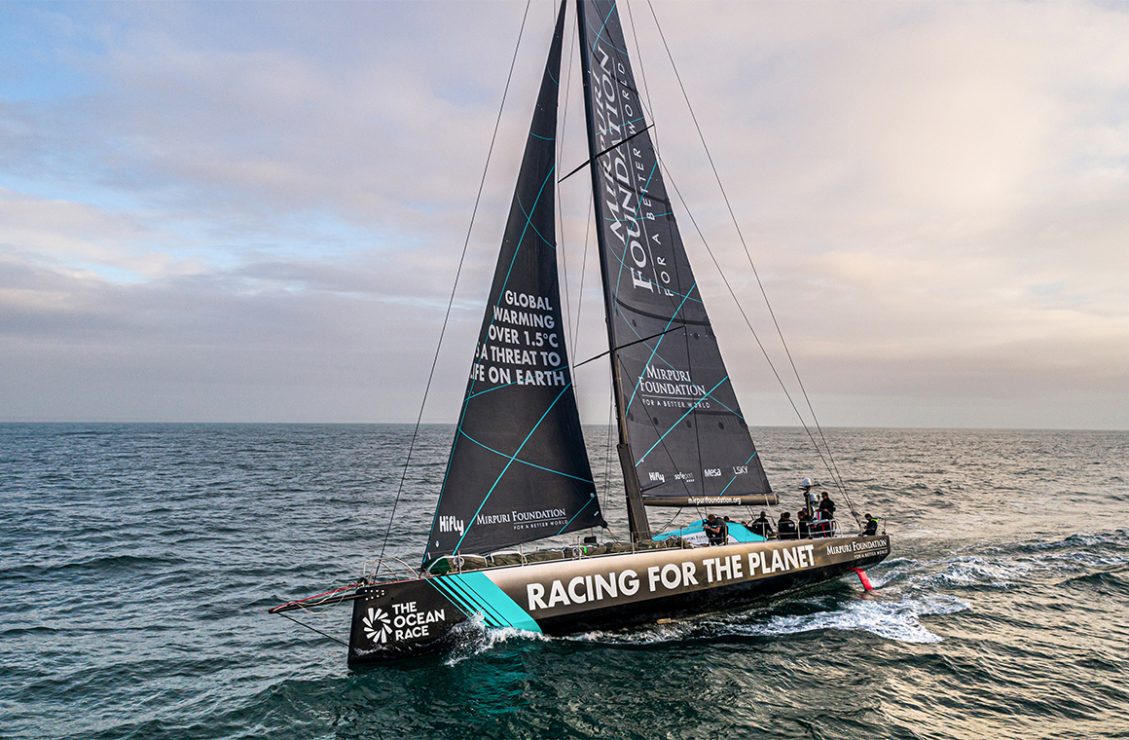 The Mirpuri Foundation’s entry for the inaugural edition of The Ocean Race Europe, named ‘Racing for the Planet’, is a VO65 class monohull racing yacht.

Such yachts, originally designed by Farr Yacht Design, were used in the 2014–2015 and the 2017–2018 editions of the Ocean Race, and, at 65ft LOA, are slightly shorter than the previous generation of Volvo Open 70s. They are considered, however, to be more reliable, robust and affordable than their predecessors whilst still being a very high-performance racing boat.

The Mirpuri Foundation vessel, ‘Racing for the Planet’, is numbered VO65-1, being the first built of eight vessels in all, and has a great pedigree, the same yacht winning the 2017–2018 edition of the Race, since which it has been completely refitted. The four-month-long refit of the boat was undertaken by renowned company Trimarine Compósitos Lda. Trimarine specialises in process engineering, construction, systems-design and the fit-out of racing and high-performance cruising yachts.

Every aspect of the boat has been examined, replaced, upgraded or reconditioned. The refit involved around 6,500 man-hours, from beginning to end, with literally everything being stripped out and replaced prior to the yacht’s delivery to the Mirpuri Foundation for its official baptism, with its ‘Racing for the Planet’ livery proudly on display.

The first task performed was an ultrasonic nondestructive test of the vessel undertaken by Trimarine’s long-time collaborators Q.I. Composites. After this, the boat was completely disassembled and all the deck gear was removed and replaced.

The boat’s entire keel was detached before new bushings were milled and fitted. All hydraulics were then checked or replaced by Italian specialists Cariboni, another company of trusted collaborators with many years of top-level racing experience behind them.

Electronics and wiring were replaced and tested by reputed specialist company Diverse Performance Systems, before the mast of the vessel was removed and made state-of-the-art by Trimarine in collaboration with engineers Rig Pro (Southern Spars), the boat’s original mast makers.

Then, with all of the technical work finished, the hull, deck and keel were comprehensively repainted in the colours of the Mirpuri Foundation. A new boat was born.

This was a particularly complex job, given the Mirpuri Foundation’s graphic design demands, and called for the use of Akzo Awlgrip Custom Metallic colours and a number of smooth blends between silver, grey, black, blue and green, with several coats of clear lacquer having to be applied over the paintwork to seal the graphics and protect the elaborate design.

For this complex job Trimarine made use of a trusted professional team with whom they have worked with for almost 3 decades, since the “Il Moro di Venezia” America’s Cup Challenge campaign back in the 1990s.