With founding partner Mirpuri Foundation and a diverse, young crew, Turn the Tide on Plastic carried an important #cleanseas message around the world, led by the irrepressible Dee Caffari…

When veteran skipper Dee Caffari piloted her Turn the Tide on Plastic race boat away from the dock in Alicante for the start of the Volvo Ocean Race on October 22 2017, she carried one of the youngest, least-experienced crews in history. 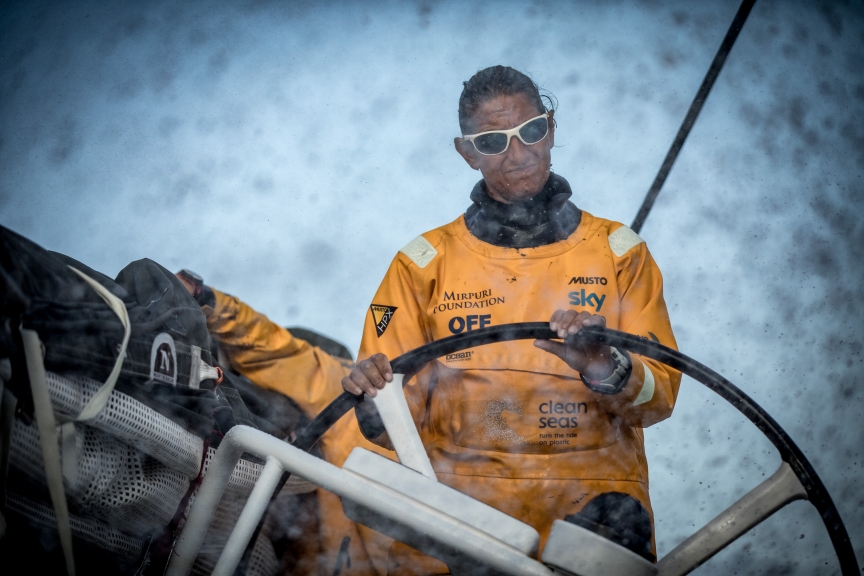 “The buzz I get now, will be seeing those faces rounding Cape Horn for the first time. To take people there, and make it happen… amazing,” Caffari said before she left the dock.

And by the time the race finished in The Hague nearly nine months later, her team had achieved an unexpected result, lifting themselves off the bottom of the leaderboard in the most dramatic way possible.

Along the way, the rookies had grown and during the second half of the race, often threatened to achieve not just a podium, but outright leg wins. But despite spending days on several legs at or near the front, the podium result never materialised.

“Yet again I’m stood here saying for the fourth leg running, ‘They didn’t get the result they deserve’,” said a frustrated Caffari in Newport, after the team had been challenging for the lead for much of the leg. “So I’m kind of stuck as a skipper on how to pick them up and get going for the next leg, but that’s what I’ve got to do.”

Not only did the Turn the Tide on Plastic crew need to deal with competitive pressures, but of equal importance to the campaign, the team passionately carried a strong #cleanseas environmental message, determined to make an impact on and off the water.

The team had scientific equipment on board to collect water samples that would later be analysed to determine the levels of microplastics that exist in some of the most remote waters on the planet.

“We’re seeing the harsh reality of how many microplastics there are in our oceans,” Caffari said, after learning of the results from some of their early samples.

“Sadly, even in the most remote parts of the Southern Ocean, we’re seeing that microplastics are present.”

But this team must also be measured by its success on the water. It would come down to the final In-Port Race in The Hague for Turn the Tide on Plastic to lift itself off the bottom of the leaderboard, and secure a sixth place finish.

“I’m so happy for the crew,” Caffari said amid the euphoria dockside at the end. “I think we really deserved this.”