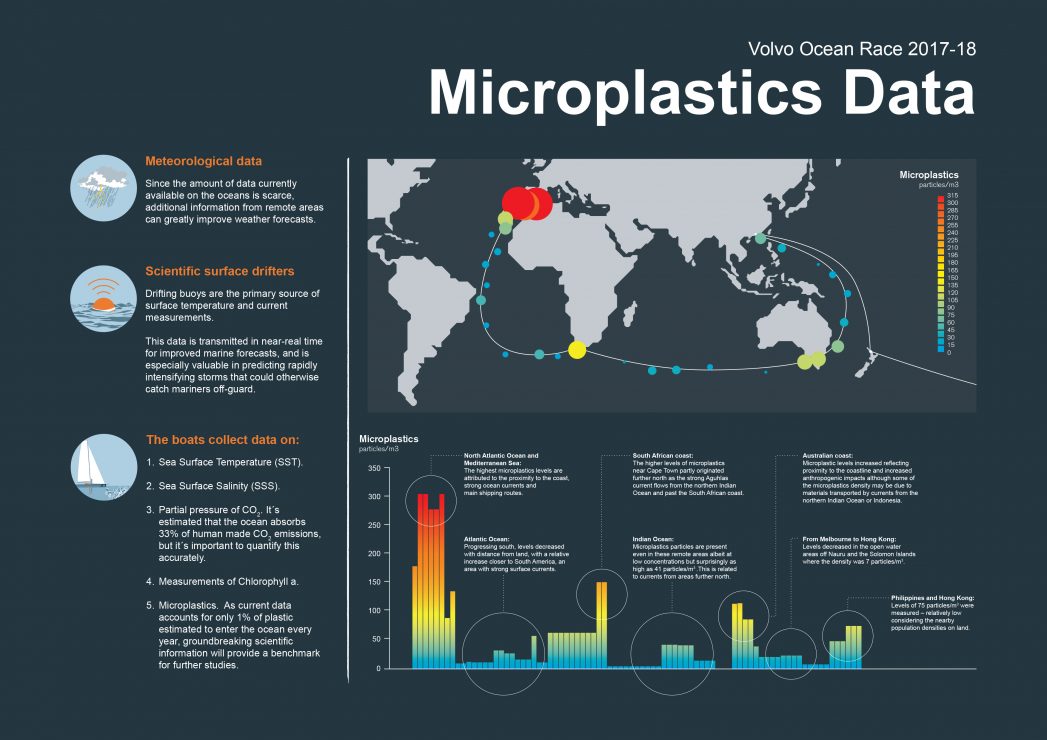 The highest levels of microplastic so far have been found in European waters where the Mediterranean Sea and Atlantic Ocean meet.  A peak of 307 particles of microplastics per cubic metre was discovered there.

The tiny particles of plastic, which break down from larger pieces such as single-use plastic bottles, were collected using a state-of-the-art instrument by Race team ‘Turn the Tide on Plastic’ during the round the world race.

Paulo Mirpuri, president of Volvo Ocean Race Principal Sustainability Partner, The Mirpuri Foundation said: “We were not expecting microplastic to be found in the most remote areas of our seas like the Southern Ocean. This came as a complete surprise to us, the dream that we would still have pristine and plastic free seas somewhere in this planet is gone and means the problem is a lot bigger than our initial assumptions. We all need to take action right now and hope it is not too late.”

Dr. Sören Gutekunst, of GEOMAR Institute for Ocean Research Kiel, funded by the Cluster of Excellence Future Ocean, analysed the preliminary microplastics data at their laboratory in Kiel, Germany.

He said: “We are finding that the concentrations of microplastics increase when the samples are taken closer to higher density populations such as Hong Kong, and in areas where ocean surface currents tend to converge and concentrate marine debris, such as in the Great Australian Bight.

“The potential to model the data in combination with ocean current information will provide an exceptional insight into where plastic pollution is originating and accumulating.

“Regardless of where the data is taken, from remote parts of the ocean, such as the Antarctic, to areas close to major urban conurbations, we are consistently finding levels of microplastics which clearly illustrates how pervasive they have become.“

Microplastics are often invisible to the naked eye and can take thousands of years to degrade. By collecting information on their levels, the mission is helping scientists gain insight into the scale of plastic pollution and its impact upon marine life.

As part of the Volvo Ocean Race Science Programme, during four of the Volvo Ocean Race legs, a total of 28 drifter buoys from the National Oceanic and Atmospheric Administration drifter program are being deployed by the vessels, at crucial oceanic regions to measure sea surface temperature and ocean current velocities. This will also help scientists understand how ocean currents could influence the movement of microplastic particles.

And Team AkzoNobel are now the second team to have signed up to the Volvo Ocean Race Science Programme, helping capture valuable data from the remotest parts of our seas.

Both teams will be collecting data during the 7,600 nautical mile leg from Auckland to Itajaí in Brazil. This race across the Southern Ocean passes by some of the remotest stretches of Ocean on the planet.

With two sets of data to compare the findings will be more robust and deliver a wider range of data as the boats may follow different routes and therefore collect information from different parts of the oceans the Race travels through.

The oceanographic data will provide important direct measurements to increase knowledge and future insights into ocean health and climate predictions.

Anne-Cecile Turner, Sustainability Programme Leader for the Volvo Ocean Race, said: “We know very little about exactly how much microplastic is contaminating our oceans so each new data sample is providing valuable information to further our scientific knowledge.

“The Volvo Ocean Race provides an exceptional opportunity to directly sample remote areas and to shed light on the global scale and geographical distribution of microplastics pollution in the ocean.

“Having a second boat collecting information on the health of our Oceans will only further enhance the quality of our Science Programme.”

The Volvo Ocean Race Science Programme is funded by Volvo Cars, who are donating €100 from the first 3,000 sales of the new Volvo V90 Cross Country Volvo Ocean Race edition to support the initiative.

“Volvo Cars is delighted to be supporting this innovative programme, whose approach to environmental care is a strong fit for us – not least as we head towards an electric future. We are keen to get an even clearer picture of the scale of the problem as the boats now head into leg seven and the most remote waters of the world. This sets an invaluable benchmark for future research and action,” said Stuart Templar, Director of Sustainability at Volvo Cars.