The sustainability programme of Volvo Ocean Race with Principal Partner Mirpuri Foundation, created to find solutions to the impacts plastic is having on our seas, came out on top in the Sports CSR Campaign of the Year category at the International Sports Awards.

The award was presented to programme leader Anne-Cécile Turner at the International Sports Convention in Geneva, Switzerland. It recognised how the groundbreaking programme combined a global sporting event with a powerful sustainability message to deliver widespread impact. The initiative also acted as a catalyst for change by helping governments, businesses, individuals and school children, through an exciting education programme, play a role in helping address the ocean crisis.

Anne-Cécile Turner, Sustainability Programme Leader, said: “Gaining recognition for the hard work undertaken by our team as we sought to lead, inspire and engage on this most vital of issues is something we are very proud of.

“We left a lasting legacy and everyone involved with the race is determined that sustainability remains at its heart and we are dedicated to the development of a new roadmap to inspire action and create tangible outcomes in the future.” 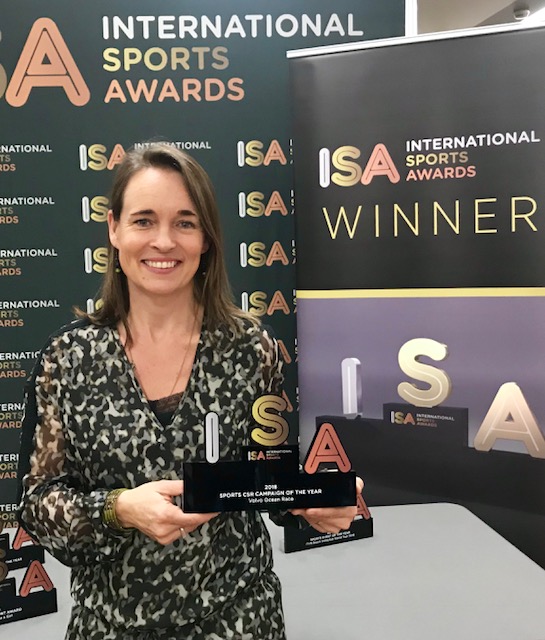 Jeremy Pochman, Strategic Director and Co-Founder, 11th Hour Racing, said: “I am excited to see the groundbreaking efforts of the Volvo Ocean Race, its partners and its stakeholders, recognised on the international sports scene. It is propitious to celebrate our achievements and build on the legacy, as we develop the next stages of this powerful collaboration – combining sport, education, and science, with local and global outreach. My hope is the work honored here will inspire other teams, leagues and organisations to use their sport as a unique platform for positive, enduring change.”

Race stakeholders, host cities and teams were key to the success of the sustainability plan and the powerful message around plastic affecting our seas has influenced changes to business models and government policy as a direct result of the race. Race partners, including Volvo Cars and Musto, were amongst those to announce changes to their business operations during the 2017-18 edition.

The race developed a key partnership with UN Environment and their #CleanSeas campaign with a message that empowered action and reached over two million people during the nine-month race. It also touched many millions more through media and online platforms.

By encouraging a no single-use plastics policy in race villages the use of a staggering 388,000 plastic bottles was avoided during the 12 stopovers. Work to educate the next generation in an inspiring and informative way was received by 114,000 children in 40 countries.

Seven Ocean Summits led to commitments by businesses, including Volvo Cars, countries, states and many others. Sailors including Dee Caffari from Team Turn the Tide on Plastic and Charlie Enright from Vestas 11th Hour Racing told audiences about their experiences of the plastic in our seas.

To advance science by combining it with sailing, an expert scientific consortium, funded by Volvo Cars, used cutting edge technology to build state of the art equipment that would capture the most relevant ocean data. Startlingly, this found that 93% of the seawater samples taken were found to contain microplastics.

“Volvo Cars is proud to have been a part of the programme, which has produced an unprecedented picture of the health of our oceans. In particular, this clearly shows the extent of the global problem of micro-plastic pollution.

“Decisive action needs to be taken, including by business. That is why Volvo Cars has made a number of pledges during the Race, including removing single use plastic by the end of 2019 and ensuring that at least 25% of the plastic in new Volvos is made from recycled material by 2025.”

The Turn the Tide on Plastic boat, supported by the Mirpuri Foundation and Sky Ocean Rescue, alongside Team AkzoNobel’s boat, collected seawater samples that were tested by race scientists for microplastics as well as levels of salinity, dissolved CO2 and algae. The findings were uploaded ‘open source’ to benefit scientific understanding of the plastic threat.

Unique information on the global concentration of microplastics pollution in our oceans has been presented at an international science conference in Lanzarote. The information was collected from seawater samples taken during...