Today, works to clean, conserve and requalify the principal façade of the São Carlos National Theater officially commence. The intervention has been driven by the Mirpuri Foundation, OPART partner. 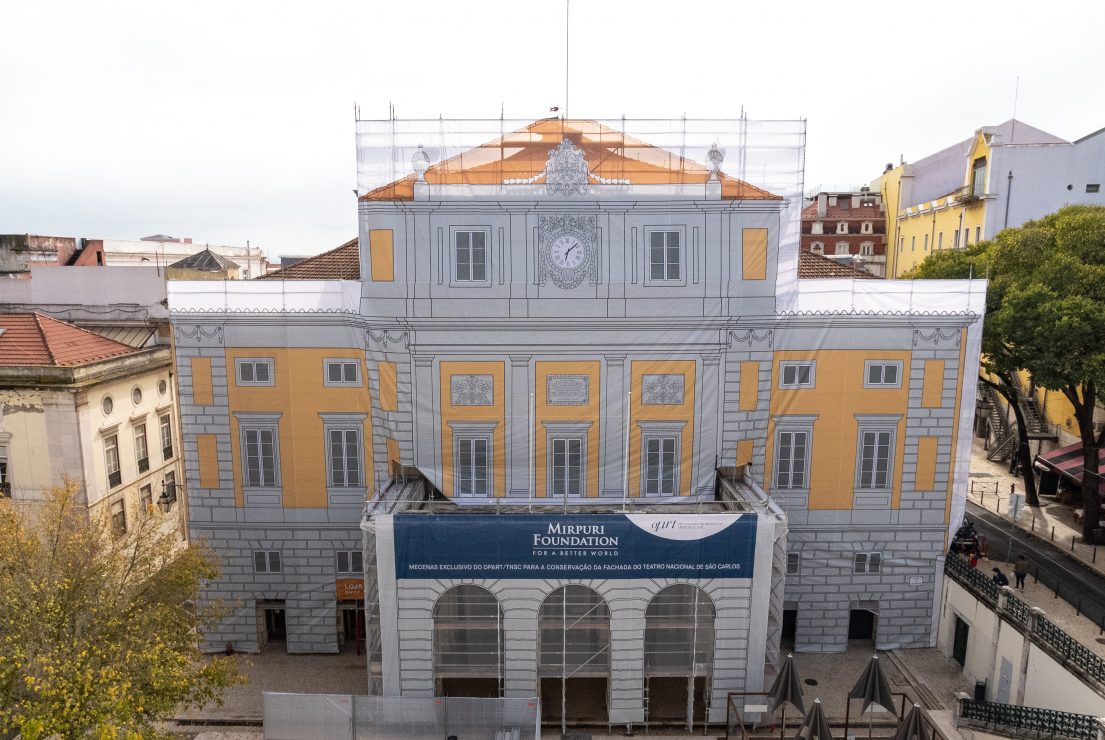 In 2018, the Organism for Artistic Production, E.P.E. (OPART) and the Mirpuri Foundation celebrated a Collaboration Protocol which contemplated, in addition to other initiatives, the support for cleaning, conserving and restoring the principal façade of the São Carlos National Theater.

This intervention, which is forecast to last 110 days, is now officially underway. During this period, corrective and preventive works will be carried out to resolve problems detected and resulting from the building’s exposure to environmental factors, lack of maintenance and human intervention.

We might recall that the Theater’s principal façade maintains its original architectural traits – the Theater was inaugurated in 1793 -, but because the building is occupied on a permanent basis, and hosts an intense amount of artistic activity, it is in need of rigorous and frequent requalification interventions.

The intervention works, which are broken down into three phases – cleaning, conservation and requalification – aim to return the building’s façade to its healthy, robust and dignified state, a condition becoming of a National Monument.

The intervention would not have been possible without the Mirpuri Foundation’s support as an Exclusive OPART/TNSC Patron for the conservation and rehabilitation of the São Carlos National Theater’s principal façade.

According to Conceição Amaral, OPART President, “this rehabilitation, whose launch we have had the pleasure to witness, resulted from a long technical and administrative process that this administration has undertaken, as well as the profound involvement of previous OPART administrations with the Mirpuri Foundation, whom we must not forget to acknowledge and thank at this moment. The conservation and restoration work on the façade of the São Carlos National Theater not only marks a milestone regarding our responsibility as managers and keepers of national heritage. It also represents our cultural strategy, which aims to cherish and dignify our artistic heritage, both movable and immovable, material and immaterial, which the São Carlos National Theater clearly represents, and which is in urgent need of requalification. For the city of Lisbon, and in particular the Chiado quarter, the rehabilitation of this façade will reclaim the image of São Carlos square, and allow visitors, residents and spectators, who follow our activities, the realization and fulfillment of the project.”

Paulo Mirpuri, President of the Mirpuri Foundation feels that “the conservation and restoration of edified heritage is an urgent necessity in Portugal. At the Mirpuri Foundation we believe that supporting culture not only dignifies what we do best in our country, the São Carlos National Theater being a prime example, it also encourages talent and promotes the arts which is essential for the development of civil society.”

About the São Carlos National Theater

The São Carlos National Theater, built according to strict neo-classical characteristics with a strong Italian influence, began construction in 1792 and was inaugurated the following year. Located in the heart of the Chiado quarter, São Carlos has been center stage for some of the greatest operatic, ballet, choral and symphonic performances of both national and international repertoire. With a truly extraordinary past, São Carlos – the only operatic theater in Portugal – is today a present and vivid genuine cultural institution, loved and respected by all who appreciate the lyric arts, dance and classical music.

The Mirpuri Foundation is a non-profit organization established in Portugal by businessman and philanthropist Paulo Mirpuri. Conceived with the purpose of creating a better world for future generations, the Foundation has established partnerships with governments, companies, communities and individuals in order to develop specific projects is areas ranging from culture, ocean and wildlife conservation to social responsibility, and research in the areas of medicine and aerospace.