“I am thrilled to have become an ambassador to one of the foundations I most admire and identify with – the Mirpuri Foundation – be it in regard to their values of sustainability or their belief system, as well as entrepreneurism and all the incredible changes they have managed to bring about. I believe that together, day by day, and step by step, we will continue to contribute towards a better world where everyone may live with the respect and love they are entitled to.” – Cuca Roseta 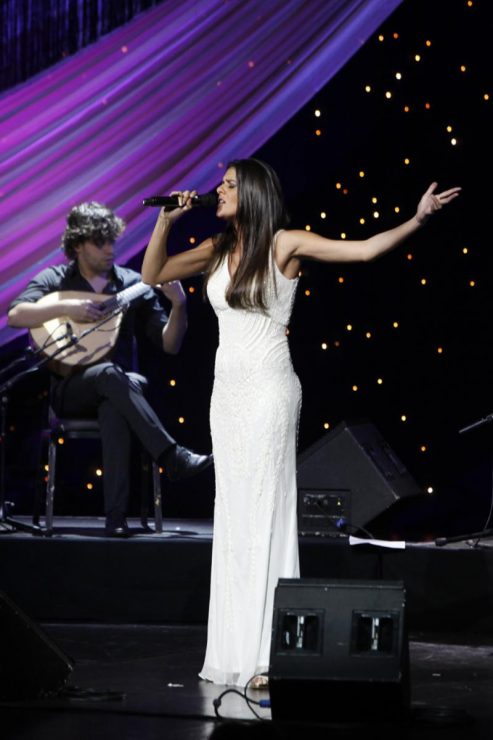 There is nothing in Cuca Roseta’s life which would foretell that the fado would, one day, choose her. There is no family history of fado performers, and the musical genre she grew up listening to was art music. Until the day, at the age of 18, she visited a fado house. The first shock, the first small onslaught to Cuca Roseta’s soul: although the fado did not yet completely seduce her, she began to need it in her life: “I went to fado houses mostly for the emotion, it was very intense”, she recalls. Without her knowing, it was already too late: she had been definitively chosen by the fado.

She began to sing, timidly. Once, a special listener recognized the truth in her voice; a truth she was beginning to express. It was Carlos Zel who insisted: “You have to learn more fados”. She promised she would do it.

Life, however, has a way of meddling in our plans and, suddenly, Cuca was a member of a pop band – Toranja – which, with only a small repertoire, was leaving its mark on Portuguese mainstream music. Those were exciting times, a successful adventure. But there was an emptiness, always an emptiness…

After having taken a degree in Psychology, she decided to participate in a fado competition in Oporto. She learned eight songs. But Cuca’s most important reward came in the form of an unshakeable truth: “This is what I want to do”, she thought at the time. And determined she went in search of her fate.

She spent a year wandering around Lisbon, singing and learning, always learning. She became a regular presence in places where fado was being performed; she spoke to musicians, other fado performers. “There was a world of things to learn which had to do with poetry, with emotion”. She met Ana Moura who encouraged her to continue. And one night she is introduced by Nobre Costa to João Braga, known for his propensity and vision for launching new fado performers in his concerts.

“What are you doing three days from now?” asked the fadista to an extremely impressed Cuca Roseta.

“Great. You’re going to participate in one of my concerts on television”.

Did anyone mention fate?

Next follows a stint in Clube de Fado. Mário Pacheco, guitarist and owner of the club, has a special ear for new voices. He liked the new fadista and she quickly became part of the prestigious ensemble. During that time she took the opportunity to absorb every single second of fado to which she was exposed. And it was during one of those nights, when she wasn’t even supposed to be there, that justifies the reason for these lines. Just like that, without any planning or hope. A night when, unforeseen, by mere chance, luck or mystery, Cuca Roseta met the Argentinian Gustavo Santaolalla: musician, producer, well-known composer of soundtracks (with Oscars for Babel and Brokeback Mountain). That dogged fate in which Cuca believes more and more. In a quiet but firm voice she confides, as if reliving that night for the first time: “I believe in fate. Things happened naturally, catching me almost by surprise”.

While hearing her sing, Santaolalla, deeply impressed, immediately told her he wanted to record with her. Cuca, sensible, found it strange – because she did not know the identity of this stranger making such an offer. Someone, at last, identified the Argentinian; Cuca apologizes for having no idea he was a producer. Santaolalla answers: “Who I am is not important. What matters is that I saw a star in you”. And he walked out.

The days passed and Gustavo continued to call insisting that Cuca get to know the musical project he had created for her. Meanwhile, other record labels, aware of the producer’s interest, start to besiege Cuca Roseta who refuses all offers with the force which comes from a passionate certainty (“my relationship with Gustavo was truly a case of musical love”), she would later confide. And thus, what had to happen, happened. The record Cuca Roseta was beginning to take form.

All fado performers who follow the circuit of the fado houses go through a terrifying trial when they have to face the loneliness of the studio. The girl who participated in Carlos Saura’s Fados or sang for Benedict XVI during the Pope’s visit to Portugal was able to give it her all, taking advantage of the incredible atmosphere provided by Gustavo Santaolalla. And she confirms: “I didn’t feel very lonely while recording; I surrendered to the emotion”. The result is a beautiful debut album, with a repertoire that includes some classics (“Rua do Capelão”, “Avé Maria Fadista” or “Marcha de Santo António”), other musical fados (the magnificent “Porque Voltas De Que Lei”, lyrics by Amália in collaboration with the producer himself and  the tanguero Cristobal Repetto; or “Maré Viva”, a poem by Rosa Lobato Faria translated into Castilian by Santaolalla), and, above all, the affirmation of Cuca Roseta as a lyricist in her own right. Some excellent examples are, “Homem Português” and “Nos Teus Braços”, for which Cuca, also, wrote the music. This “autonomous” talent brings her even closer to her music.

With the perfect musical accompaniment, Mário Pacheco on the guitar, Pedro Pinhal on the viola de fado (six-string guitar of the Spanish form) and Rodrigo Serrão on the double bass. And overseeing it all is Gustavo Santaolalla’s extraordinary sensitivity, giving Cuca time, space and voice to express her feelings and, at last, show them to the world; because the soul is universal.

Perhaps these are difficult times, in which reality is more invasive than we would like. But the soul resists, the soul persists. The almost mystical force which radiates from Cuca Roseta, her faith, the communion with her feelings and nature may give us the hope for redemption from everything by its sheer beauty. When we, once again, insist on fate, she smiles and, once more, disarms us: “All I want to do is to sing”. She gets up, joins the other musicians waiting for her, and her perfectly pitched voice mingles with the Portuguese guitar. And we let ourselves be taken along this path of absolute truth.